The hotel’s facade and interior design are the work of world-renowned architect Kengo Kuma.
Fusing industrial materials with natural wood, this new hotel exemplifies the contrast found in Oshiage, which retains the feeling of a bygone Edo era, while being within the modern metropolis of Tokyo. 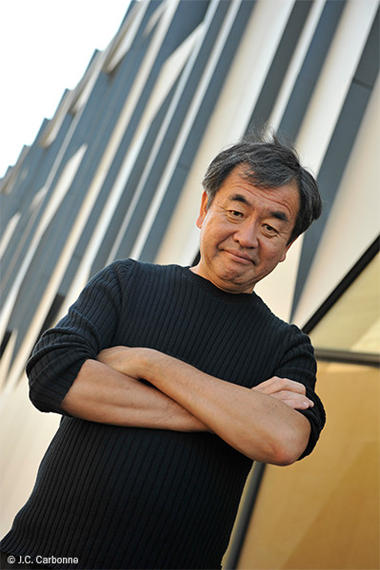 The hotel opens directly to city space and open sky, all from a little alley in the new Shitamachi “downtown” of Tokyo. Travelers from all over the world come together here—a new base for Tokyo street culture.

Born in 1954, he graduated from the Department of Architecture Graduate School at the University of Tokyo and established Kengo Kuma and Associates in 1990.
He is currently a professor at Tokyo University. In 1997, he won the AIJ Prize for “Noh Stage in the Forest/Tome City Heritage Hall,” and has subsequently won many awards from overseas organizations for works including “Water/Glass” (1995), “Stone Museum” (2000), the Bato Hiroshige Museum of Art (2000) and others. In 2010, he received the Mainichi Art Award for the Nezu Museum.
Recent works include the Yusuhara Wooden Bridge Museum (2010), the Asakusa Culture Tourist Information Center (2012), and Nagaoka City Hall Aore (2012).
At present, he is also involved in designing the new national stadium for the Tokyo 2020 Olympics (scheduled for completion in 2019.)

Installation
【Definition】
1. An art exhibit. An installed object.
2. A base of operations.

This word expresses our pride in the fact that our hotel is an art exhibit. We sincerely hope that it will serve as a central base and information center for travelers.

In Oshiage, Tokyo’s modern cityscape—including Tokyo Skytree® and other new buildings—intersects with the charm of old Edo. Cutting-edge innovation can be found alongside time-honored cordiality, metropolitan refinement alongside deep human connection. Here you’ll feel the stark contrast of this powerful ethos—a journey through time. With Oshiage as your home base, you can be sure to have one-of-a-kind discoveries and encounters. 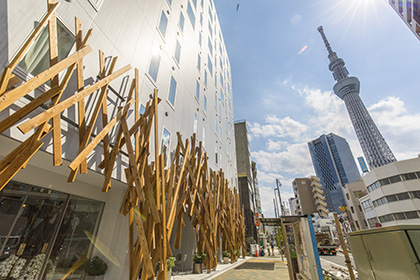 ONE@Tokyo is a work of art, and a base where travelers gather. As such, to ensure that everyone has a pleasant experience, the facility is completely non-smoking.